A few weeks ago I published a post on the AquaQ Analytics (my employer) blog regarding using REST APIs in kdb+. You can read that blog post on the AquaQ blog. Just for fun, I decided to try building the “other side” - creating a REST API powered by kdb+. The result is found in my GitHub repo, qwebapi. 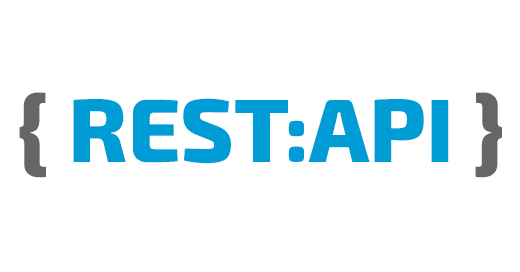 You may be wondering why you would want to provide a REST API from kdb+ - it provides a very simple method of interoperability with other languages and technologies, beyond those with an existing interface (e.g. with Fusion interfaces from kx). Creating products such as web based dashboards is simplified by having data available over REST APIs, for example.

So far, the simple api.q script found in the repo supports defining functions for both GET & POST HTTP methods, as well as defining default parameters and required parameters. In addition, basic HTTP authorization is supported, allowing restriction of access to authorized users.

Some of the ground work for building an HTTP API was already done in reQ, an HTTP requests library, featured in the previously mentioned AquaQ blog point, and nearing a first “release”, at which point I’ll do a more detailed write-up here. Building on this, it was a fairly quick & simple process to create a very basic HTTP API written in q. This is by no means a “production ready” library, and lacks a number of important features (e.g. error handling, logging etc.)

Using api.q is fairly simple; first of all, clone the repo (using the --recurse-submodules option to clone reQ as well):

Now, within a q session, load the api.q script & set a port. In addition, define your API functions; these should be regular KDB functions, registered as an API function using the .api.define function. This function takes the name of the function, a dictionary of default values (which will be used for types), a list of required parameters and the supported HTTP methods (`GET,`POST or ` for both).

Using sp.q from kx to provide some example data, here is a simple example of creating a basic API:

We now have a simple HTTP API running on port 1235; we can query this with any tool capable of sending HTTP queries. In other words, the vast majority of programming languages, a number of command line tools (cURL, wget etc.) and so on. For the sake of some examples, we’ll use Postman to issue some queries to our API.

First off, we’ll call the example function defined above, with the GET method:

Next up, we’ll set a city using setcity:

Oops, wrong method - when we called .api.define for this function, we only allowed POST requests: 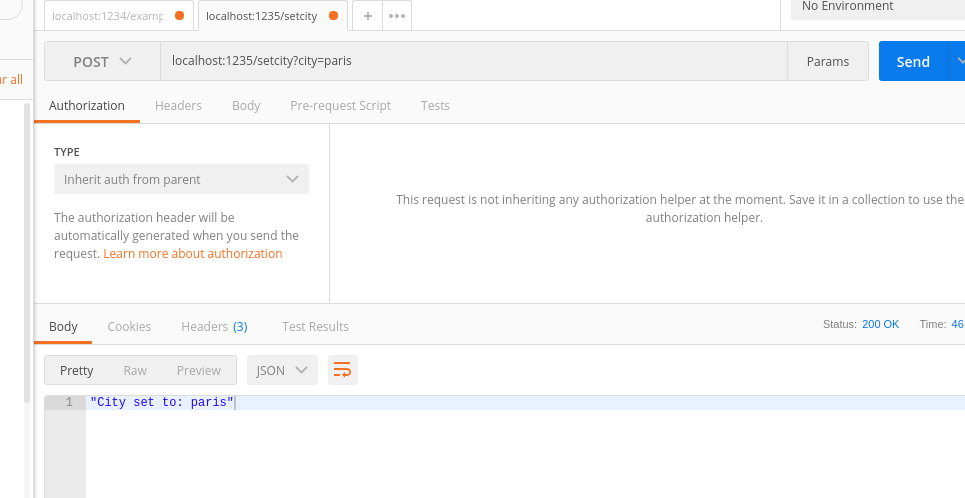 That’s better! Now we can call gets to make use of the city we just set: 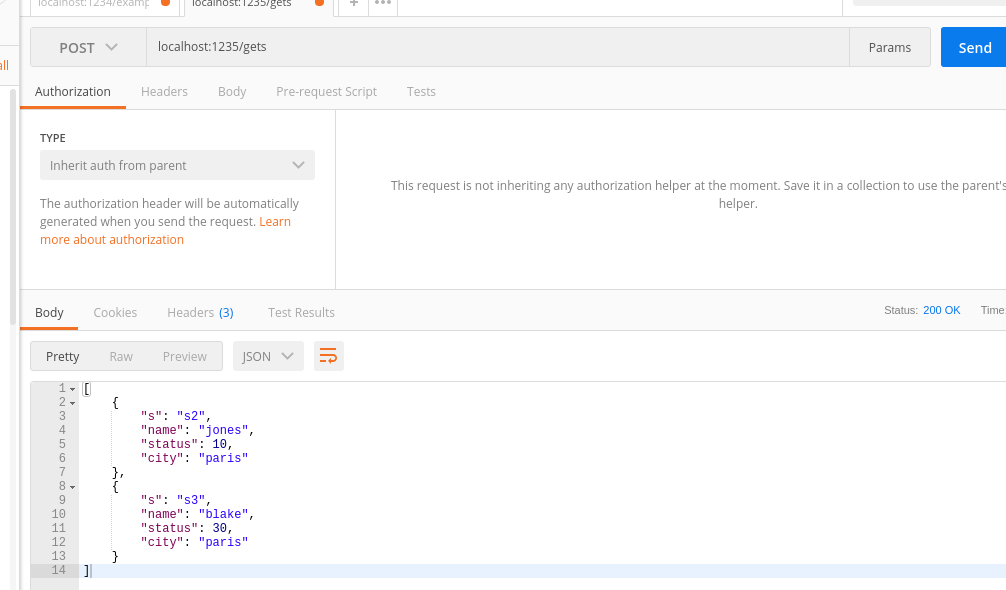 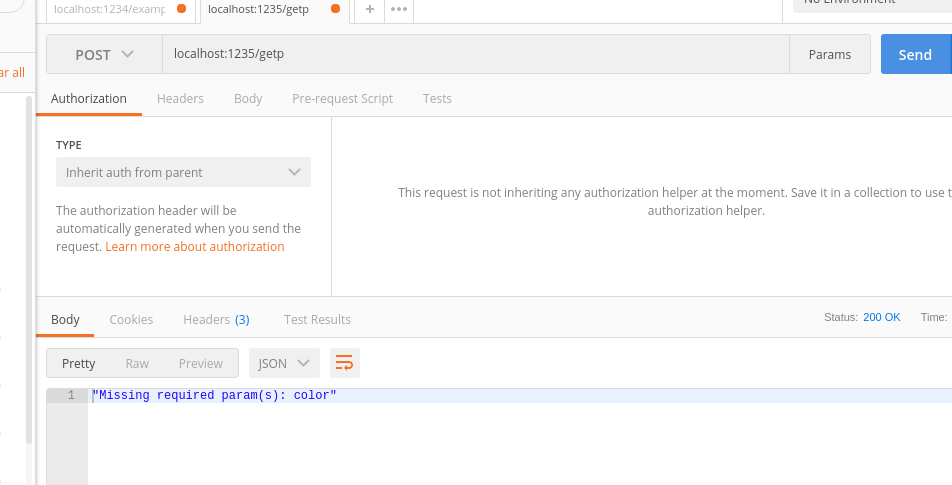 When we defined this one, we made color a required parameter, better include it with our request: 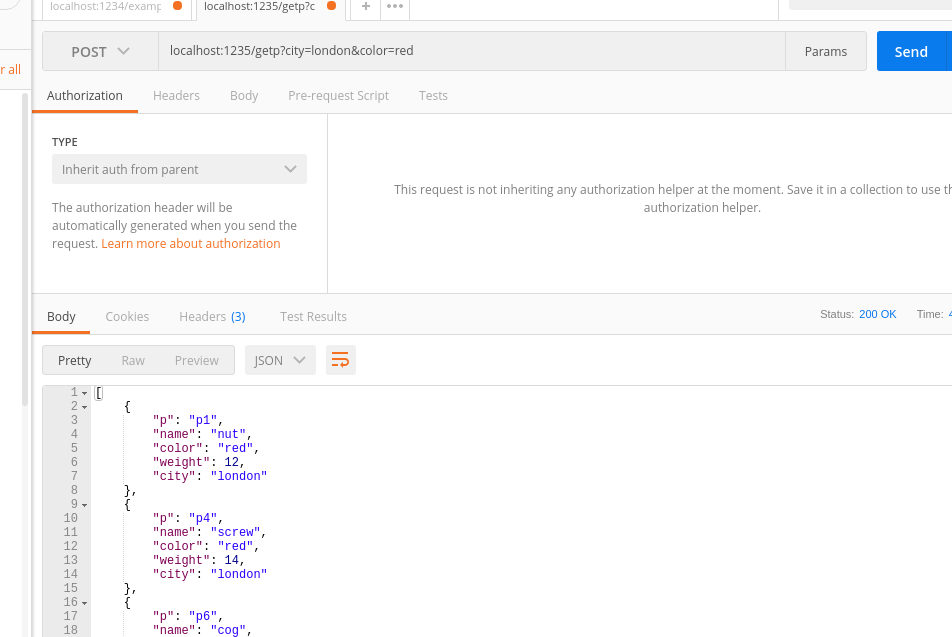 I haven’t shown the use of HTTP basic authorization, but it’s quite simple - start the process with -auth user.txt where user.txt is a text file containing user:pass combinations, one per line. Then, basic authorization will be enabled. Currently, HTTPS is not supported, although I may explore that option in a future post.

For example, let’s define a trivial function that takes a dictionary as one of it’s parameters:

Given this function requires a dictionary, we can’t pass that in URL parameters (so it makes no sense to allow GET requests) or a URL encoded body, but we can use a JSON body, for example: 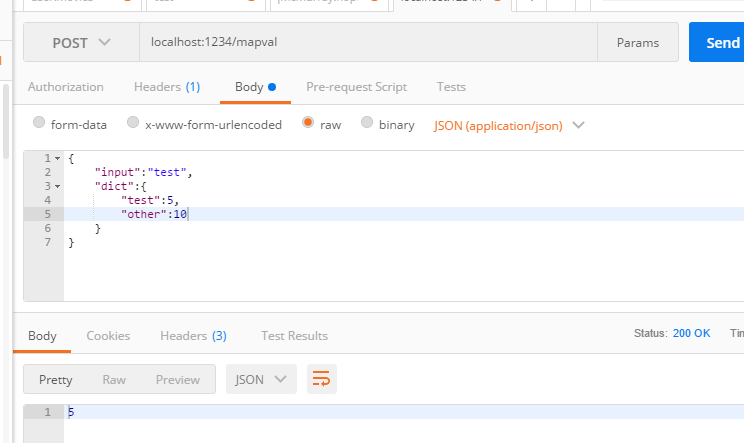 It might be worth noting that kx have recently announced that the latest version of kdb+ (3.6) has enhanced support for unstructured data, with JSON support 10 times faster than in previous versions; this should make JSON based REST APIs considerably faster & more efficient now! For further details on the 3.6 release see code.kx.com.

As mentioned above, this is not really a “production ready” library, it is quite rudimentary and rough around the edges. The main point was to see if it was possible to write a REST API in pure q (which it is!). If you actually need to provide a kdb+ backed REST API, I suggest you keep an eye on AquaQ’s GitHub and blog for an upcoming open source release; I’m not a part of the team that’s been working on this, so I don’t know the full extent of the functionality etc., but I’m quite certain it’ll be a lot more polished and robust than this simple script!